ResInsight computes several derived results. In this section we will explain what they are, and briefly how they are calculated.

ResInsight calculates several derived cell properties that is made available as Static or Dynamic cell properties. The derived results listed at the bottom of the Static result properties, are shown below. 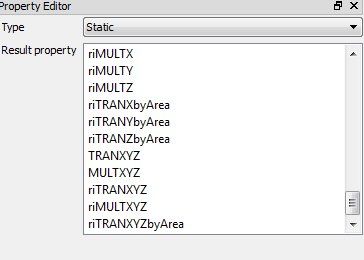 The transmissibility for cells and Non-Neighbor Connections (NNCs) are dependent on both cell properties and geometry. ResInsight normalizes TRANX, TRANY and TRANZ with the overlapping flow area for both neighbor cells and NNC-cells. The results are named riTRANXbyArea, riTRANYbyArea and riTRANZbyArea respectively.

The normalized transmissibilities make it easier to compare and check the flow capacity visually. This can be useful when history matching pressure differences across a fault.

Transmissibility can be set or adjusted with multiple keywords in an Eclipse data deck. To visualize the adjustments made, ResInsight calculates a multiplicator for the overall change. First unadjusted transmissibilities for all neighbor cells and NNCs are evaluated based on geometry and permeabilities, similar to the NEWTRAN algorithm in Eclipse. For x- and y-directions, the NTG parameter is also included. The results are named riTRANX, riTRANY and riTRANZ respectively.

The TRANX, TRANY and TRANZ used in the simulation are divided by the ResInsight calculated transmissibilities and the resulting multiplicators are named riMULTX, riMULTY and riMULTZ respectively. The derived properties are listed under Static properties. The riMULT-properties are useful for quality checking consistence in user input for fault seal along a fault plane.

These combined cell properties visualize the property as a color in all directions combined when selected in as a Cell Result and Separate Fault Result.

The directional combined parameters available are: 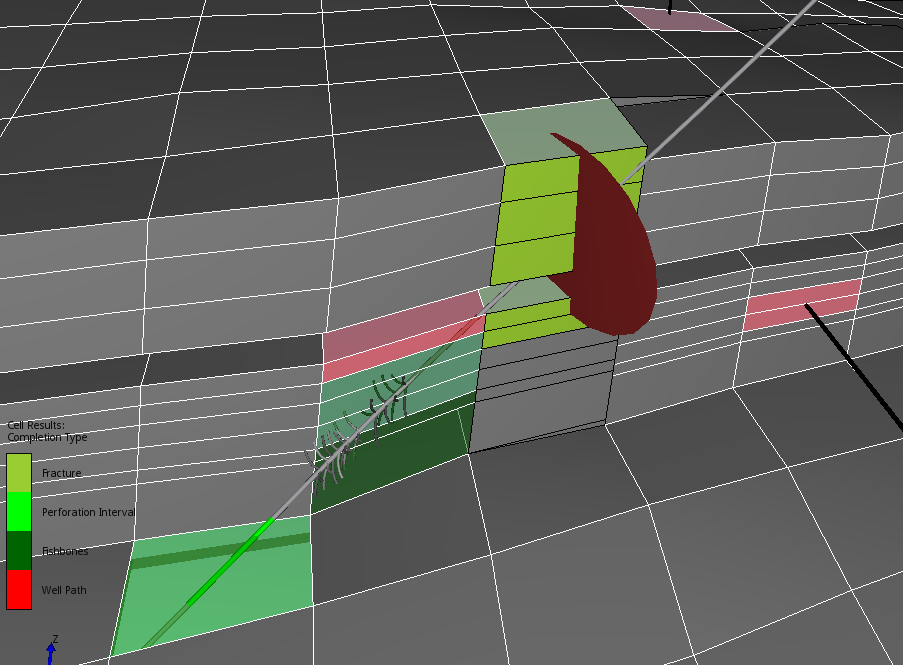 The dynamic cell property named Completion Type is calculated from the intersections between Completions and the grid cells. All grid cells intersected by a completion will be assigned a color based on the type of completion that intersects the cell.

If a cell is completed with multiple completions, the following priority is used : Fracture, Fishbones, and Perforation Interval.

In the process of normalizing transmissibility by the overlapping flow area, the NNCs in the model without any shared surface between two cells are identified. These NNCs are listed in the Faults/NNCs With No Common Area folder. These NNCs are questionable since flow normally is associated with a flow area. 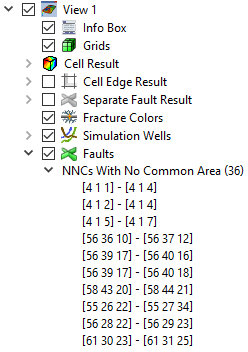 Water Flooded PV, also called Number of flooded porevolumes shows the amount of flow from a selected set of simulation tracers into a particular cell, compared to the cells mobile pore volume. A value of 1.0 will tell that the tracers accumulated flow into the cell has reached a volume equal to the mobile pore volume in the cell.

ResInsight calculates several of the presented geomechanical results based on the native results present in the odb-files.

ResInsight can calculate and display relative results, sometimes also referred to as Time Lapse results. When enabled, every result variable is calculated as : 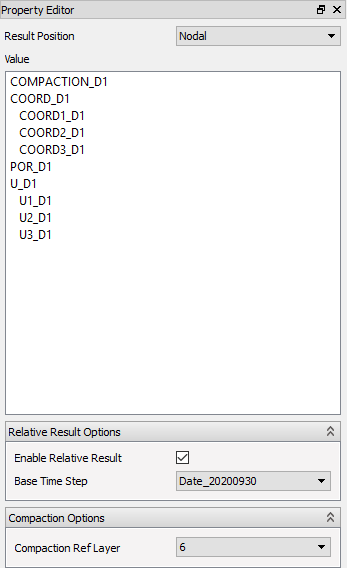 Each variable is then post-fixed with “_DTimeStepIndex” to distinguish them from the native variables.

The calculated result fields are:

In this text the label Sa and Ea will be used to denote the unchanged stress and strain tensor respectively from the odb file.

Components with one subscript denotes the principal values 1, 2, and 3 which refers to the maximum, middle, and minimum principals respectively.

Components with two subscripts however, refers to the global directions 1, 2, and 3 which corresponds to X, Y, and Z and thus also easting, northing, and depth.

Two constants can be assigned to a Geomechanical case:

In the following they are denoted s0 and fa respectively. Some of the derived results use these constants, that can be changed in the property panel of the Case. 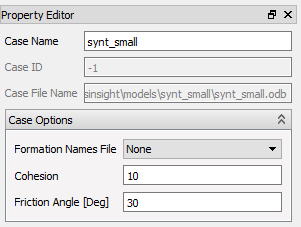 For each node n in the grid, a node nref in the reference K layer is found by vertical intersection from the node n.

We use a value of POR=0.0 where it is not defined.

STi = Principal value i of ST

In these calculations we set Gamma to undefined if abs(POR) > 0.01 MPa.

SEij = undefined (Were POR is not defined)

SEi = Principal value i of SE

For each face displayed, (might be an element face or an intersection/intersection box face), a coordinate system is established such that:

The stress tensors in that particular face are then transformed to that coordinate system. The following quantities are derived from the transformed tensor named TS in the following:

These are the directional angles of the face-normal itself.