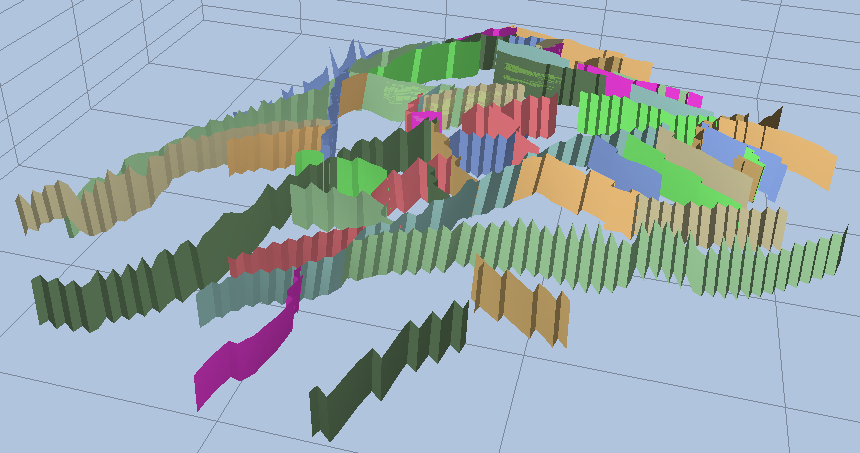 This section describes how Faults are detected and visualized. NNC’s are a part of the Faults visualization and are thus also mentioned in this section.

ResInsight always scans the grids for geometrical faults when they are loaded. When two opposite cell faces of I, J, K neighbor cells does not match geometrically, they are tagged.

All the tagged cell faces are then compared to the faults possibly imported from the *.DATA file in order to group them. If a particular face is not found among the fault faces defined in the *.DATA file (or their opposite faces), the cell face is added to one of two predefined faults:

These particular Faults will always be present, even when reading of fault information from the *.DATA file is disabled.

If enabled in Preferences, ResInsight will import fault information from the *.DATA files and use this information to group the cell faces into named items. The imported faults are ordered in ascending order based on their name.

The DATA file is parsed for the FAULT keyword while respecting any INCLUDE and PATH keywords.
As import of faults can be time consuming, reading of faults can be disabled from Preferences->Import faults

If enabled in Preferences, ResInsight will read Non Neighbor Connections from the Eclipse output file (*.INIT), and create explicit visualizations of those. The NNC’s are sorted onto the Fault’s and their visibility is controlled along with them.

Faults can be hidden and shown in several ways.

Each named Fault is given a color on import. This color can be controlled by selecting the fault and edit its Fault color in the Property Editor.

The default result mapping used on faults are to use the same as specified in Cell Result. If a different result mapping is wanted, enable the checkbox at Separate Fault Result and select the result from the result selection dialog in the Property Editor. A second legend for the fault result is then added to the view.

Visualization mode and mesh lines can be controlled from the toolbar.

Faults item in the Project Tree, the following options common to all the faults are displayed: 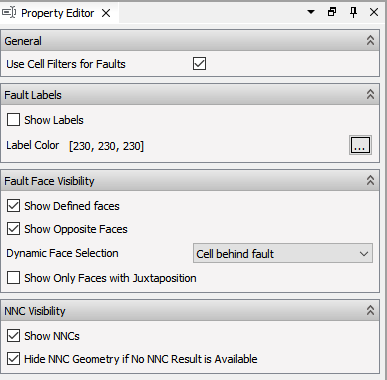 This group of options controls the visibility of the fault faces. Since they work together, and in some cases are overridden by the system, they can be a bit confusing.

First of all, these options are only available in Faults-only visualization mode ( See Toolbar Control ). When not in Faults-Only mode, ResInsight overrides the options, and the controls are inactive.

Secondly, the option you would normally want to adjust is Dynamic Face Selection ( See below ).

The color of the NNC faces are set to be a bit lighter than their corresponding named fault, and can not be controlled directly.

Faults can be exported to separate files in the *grdecl file format. This is useful for example if you need a list of the geometrically detected faults that has not been covered by entries in the eclipse FAULTS keyword.

To export some faults, select the faults you want to export in the Project Tree, and select the command Export Faults … from the right-click menu. 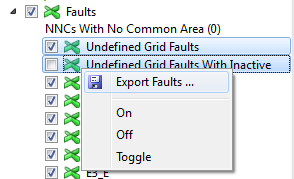 You are then prompted to select a destination folder. Each Fault is exported to a file named Faults_<fault name>_<case name>.grdecl and stored in the selected folder.