The command File -> Import -> Well Data -> Import Well Paths From File will read the well paths in the selected file, and create one entry for each well path under the

The supported ASCII format is quite flexible but the main requirements are:

The well path data is not copied into the ResInsight project as such. The project file only stores the file path, and the next time you open the project, ResInsight will try to read the well data from the file again.

If the well path file is changed and you would like a running ResInsight to update accordingly, you will need to delete all the well paths that emerge from that file, and import it again.

The command File -> Import -> Well Data -> Import Well Paths From SSI-hub launches a wizard to guide you through the process of selecting the well paths you need. Having completed the wizard, the imported wells are accessible as Items under the

The well path data is not copied into the ResInsight project as such, but is stored in files in a directory called ProjectFileName_wellpaths in the same directory as your project file.

Access to web service: If you are an Equinor employee, make sure you have access to “EDM Landmark” and “EDM Compass”.

All the imported well paths are available below the 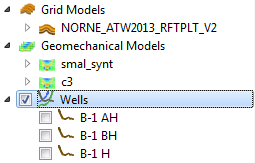 The visible wells are always shown in all the 3D Views in the complete project, so the toggles and settings control the overall project visibility of the Well Paths. The Property Editor of the Wells item is shown below 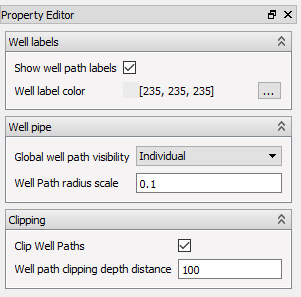 Some Casing Design elements can be assigned to the well path by selecting Create Casign Design from the right-click menu of the well path.

This will create a new child object for the Well Path, named Casing Design. In the Casign Design Property editor well path containment properties such as Casing (with Casing Shoe) and Liner can be added to the well path along with a start and end depth and a diameter. 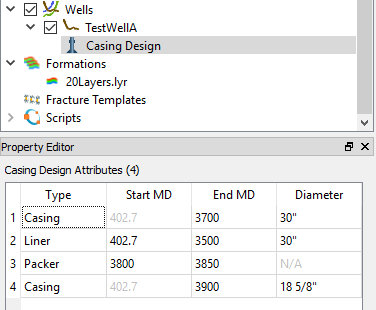 These can be visualised in the 3D View and Well Log Plots on a Well Log Track.